Back in January of 2019, I read a post on Tim Challies’s blog entitled “What Amy Carmichael Hung on Her Wall.”  He had been searching the world for objects of historical significance for his book, Epic: An Around-the-World Journey Through Christian History, and had arrived at missionary Amy Carmichael’s living quarters at Dohnavur Fellowship in southern India.  These living quarters have been preserved much as they were upon her death in 1951.  Notably, twenty years before her death, Amy Carmichael suffered an injury which confined her to these quarters from which she directed her ministry, wrote books and letters and met with the children in her care. 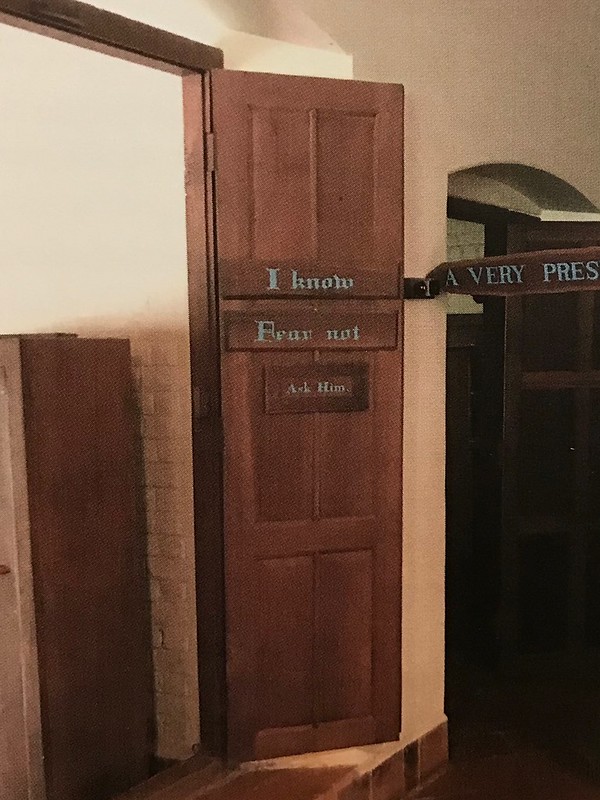 Tim Challies observed that  all around the spot where her bed had been there were pictures and Scripture passages that had been unmoved.  Three of the plaques hang one above the other and have the words “I know,” “Fear not” and “Ask Him” painted on them.  Challies explained that when Amy Carmichael voiced the fear that she had become a burden to others and a hindrance to her ministry due to her injury, a friend encouraged her with Revelation 2: 9-10 which include the phrases, “I know….Fear not.”  In addition to having the phrases painted on plaques, Amy Carmichael also wrote a poem about them (quoted from Frank L. Houghton’s Amy Carmichael of Dohnavur):

“I know”: the words contain

Unfathomable comfort for our pain.

How they can hold such depths I do not know–

I only know that it is so.

“Fear not”: the words have power

To give the thing they name; for an hour

Of utter weariness, the soul, aware of One beside her bed,

I thank Thee, and I worship–

When I read this post, I had just completed another year of reading through the Bible and had been struck by the repetition of “I know” in Revelation.  God knows.  He KNOWS.  There is absolutely nothing that He does not know about me, my fears, my thoughts…and it is futile and ridiculous to attempt to put on a “good face” in my prayer life because HE KNOWS!  And since He knows, I can “Fear not” because I can “Ask Him” anything and bring all of my concerns and cares and anxieties to Him. 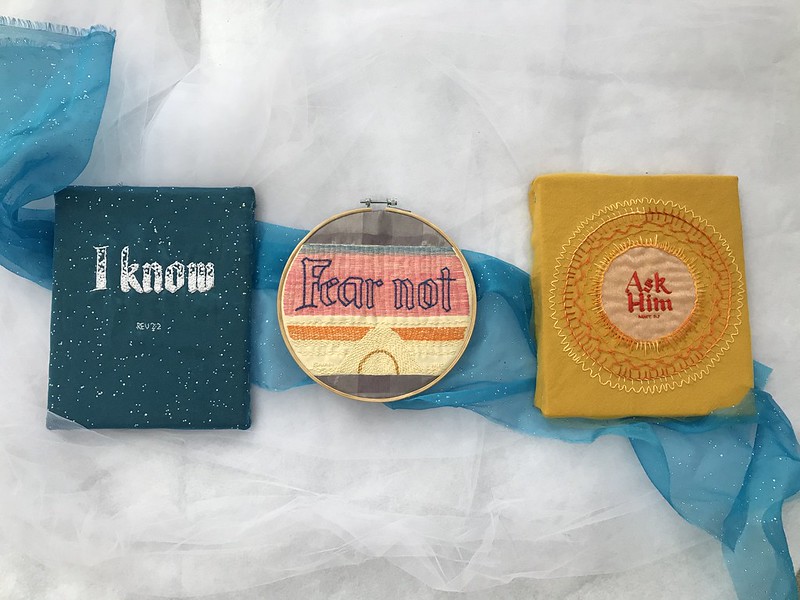 Because I am–like most humans–forgetful, I decided to make some reminders of these very important Biblical phrases.  I designed some embroidery patterns that reflected the font used on Amy Carmichael’s plaques.  As I embroidered these designs, I wanted them also to reflect a progression from darkness to light.  My deepest, darkest fears, thoughts and anxieties (as well as everything in the universe) are known by God so “I know” is embroidered in French Knots on a dark gray felt night sky with a sheer, “star-studded” fabric overlay. 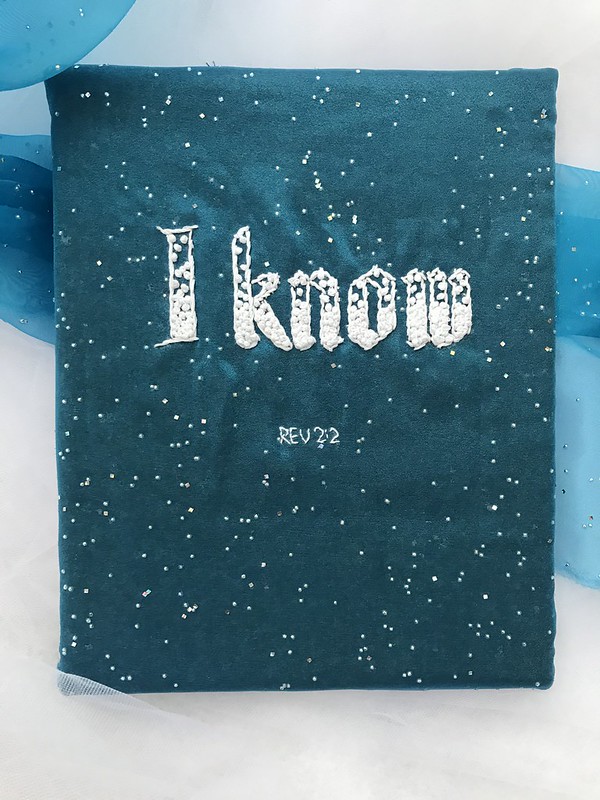 “Fear Not” is rising with the sun on another double-layered fabric with single-strand Brick Stitch predominating the design. 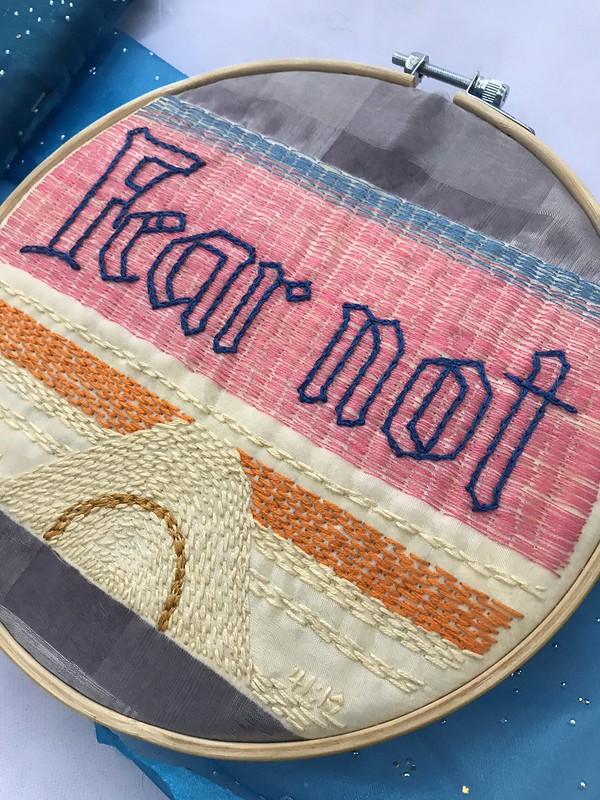 “Ask Him” culminates in the fully risen sun as the Son illuminates every aspect of my life. I used a variety of stitches for this piece.  I also utilized some variegated threads. 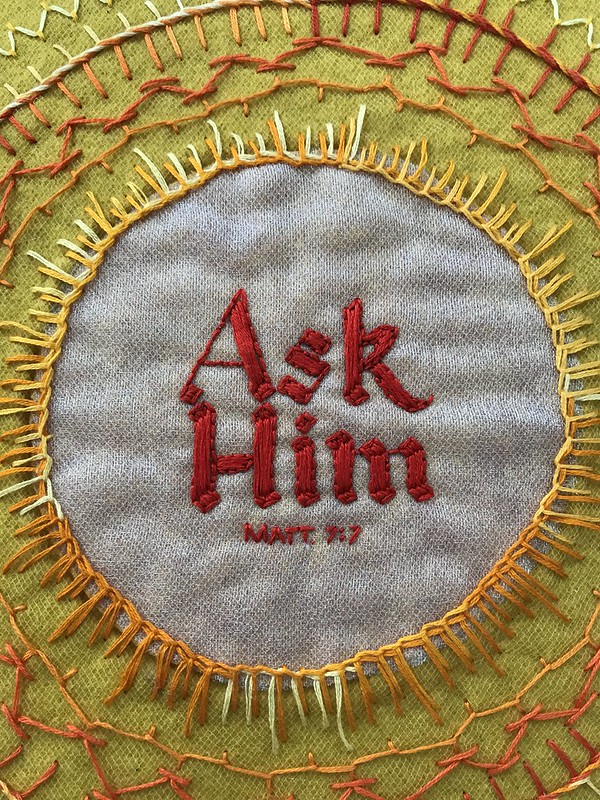 Because I think that these phrases are such valuable reminders of supremely important Scriptural concepts, I am sharing the patterns!  CLICK HERE to get your FREE embroidery patterns!  These three free patterns consist ONLY of the black-line patterns for the words on Amy Carmichael’s plaques (in other words, there are not directions for embroidering them as I have). I hope you are able to envision what these phrases mean to you and embroider them in your own unique way.  I think that simply transferring the patterns to pieces of muslin using a window as a backlight and then simply embroidering around each letter with a simple backstitch would be strikingly similar to Amy Carmichael’s straightforward plaques. And when you embroider them, share your projects with us on Instagram with #IknowFearnotAskHim!